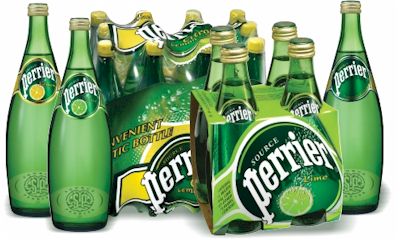 The spring from which Perrier water is sourced is naturally carbonated. Both the water and natural carbon dioxide gas are captured independently. The water is then purified, and, during bottling, the carbon dioxide gas is re-added so that the level of carbonation in bottled Perrier matches that of the Vergèze spring.

Perrier is available in 750 mL, 330 mL, and 200 mL glass bottles in Europe, as well as in 330 mL cans. In other markets, the 250 mL can is also available. Perrier bottles all have a distinctive ‘teardrop’ shape and are a signature green color. In August 2001, the company introduced a new bottling format using polyethylene terephthalate to offer Perrier in plastic, a change that was researched for 11 years to determine which material would best help retain both the water’s flavor and its purported “50 million bubbles.”

Perrier comes in several flavors: Natural, Lemon, and Lime have been in market for many years, and in 2007, Citron Lemon-Lime and Pamplemousse Rose (Pink Grapefruit) flavors debuted in the United States. In 2015, a Green Apple flavor was launched in France as well as the US. In 2016, a Mint flavor (Saveur Menthe) was introduced in France.

Since 2002, new varieties of Perrier have been introduced in France, for example, Eau de Perrier is less carbonated than the original, and comes in a blue bottle. Perrier Fluo comes in flavors such as ginger-cherry, peppermint, orange-lychee, raspberry, and ginger-lemon.

The spring in Southern France from which Perrier is drawn was originally known as Les Bouillens. It had been used as a spa since Roman times. Local doctor Louis Perrier bought the spring in 1898 and operated a commercial spa there; he also bottled the water for sale. He later sold the spring to St John Harmsworth, a wealthy British visitor. Harmsworth was the younger brother of the newspaper magnates Lord Northcliffe and Lord Rothermere. He had come to France to learn the language. Dr. Perrier showed him the spring, and he decided to buy it. He sold his share of the family newspapers to raise the money. Harmsworth closed the spa, as spas were becoming unfashionable. He renamed the spring Source Perrier and started bottling the water in distinctive green bottles. The shape was that of the Indian clubs, which Harmsworth used for exercise.

Harmsworth marketed the product in Britain at a time when Frenchness was seen as chic and aspirational to the middle classes. It was advertised as the Champagne of mineral water. (There are champagne houses by the name of Laurent-Perrier and Perrier-Jouët, but there is no connection.) Advertising in newspapers like the Daily Mail established the brand. For a time, 95% of sales were in Britain and the U.S.

Perrier’s reputation for purity suffered a blow in 1990 when a laboratory in North Carolina in the United States found benzene, a carcinogen, in several bottles. Perrier stated that it was an isolated incident of a worker having made a mistake in filtering and that the spring itself was unpolluted. The incident ultimately led to the worldwide withdrawal of the product, some 160 million bottles of Perrier.

From 1981 to 2005, the company sponsored an annual comedy award in the United Kingdom, the Perrier Comedy Award, also known as “The Perriers”. In 2006 it was announced that Perrier would no longer sponsor the award, which was renamed the “if.comedy awards”, after its new sponsor, Intelligent Finance.

In 1992, Perrier was bought by Nestlé, one of the world’s leading food and drink companies. Nestlé had to contend with competition from the Agnelli family for ownership of the business.

In 2004, a crisis erupted when the Nestlé announced a restructuring plan for Perrier. The following year, Perrier was ordered to halt restructuring due to a failure to consult adequately with staff.

In 2013, Perrier celebrated its 150th anniversary by launching a limited edition series of bottles inspired by Andy Warhol.